The Kingston District Fire Department was established in 1944 by a group of local citizens that identified the need for a dedicated fire service in the village of Kingston. Over the years with the growth of 14 Wing Greenwood military base and the construction of new county fire boundaries our department has expanded its mandate to effectively manage this growth. It was originally started by a handful of gentlemen and has since grown to its present complement of 65 firefighters. This department is a multi cultural and diverse entity of men and women dedicated to protecting the public it serves.

Since the department’s establishment it has been located at three different locations. First was on Victoria Street, the building which now houses the Annapolis Valley Wellness Center. Its second location was on Main Street, which the Kingston Village Office now occupies. Finally, the station found its present home at 570 Sparky Street. This street was built specifically for the fire station, and during its construction, the naming of the street was a contest at the local elementary school. Classes each provided a name, and one was chosen as a winner. Many of the students in the winning class were children of past or current firefighters, and a plaque still hangs in the rental portion of our fire station with all the students’ names. 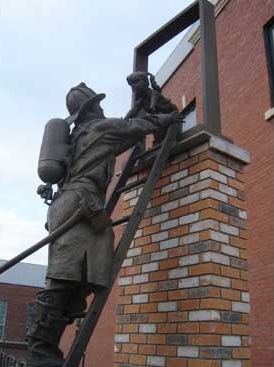 As the department moves forward, we will continue to recruit new members, both male and female, from all diversities and lifestyles. We will continue to improve and enhance our department and its members in order to remain on the front-line of fire service deployment and technology for the communities we serve.